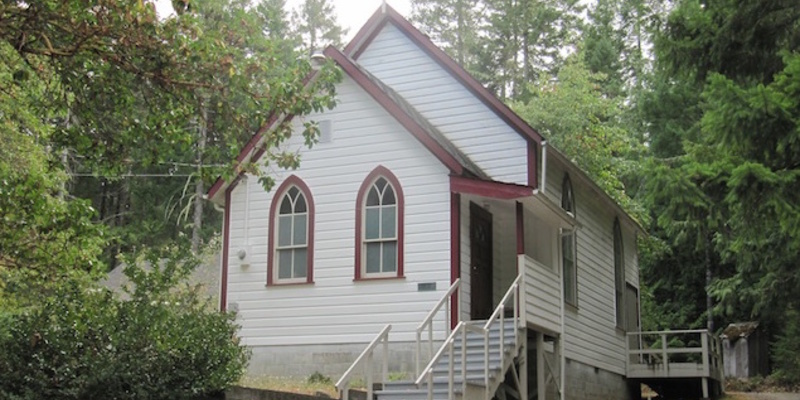 A BRIEF HISTORY OF

Knox Church started out in 1909 as a Mission Field of the Presbyterian Church of Canada.  In 1911 building began on donated land on the Island Highway, across from the current location of the Community Park.

The little building, now located in Craig Heritage Park, was completed in 1912.  Services were also held in private homes in Errington, Hilliers and Nanoose Bay, and in 1914 in Qualicum Beach.

For the first two years, the Parksville Pastoral Charge was served by student ministers who travelled by bicycle from Wellington, which was, at that time, the end of the railroad.  The first ordained Minister was the Rev. J.H. Cameron.

The growth of the congregation remained fairly static until the early seventies.  Like many churches Knox was receiving support from the Mission + Service Fund, but in 1974 Knox became self-supporting.

Two services were held every Sunday, but as the town grew, even two services did not suffice, and there was hardly any room for Sunday School and other programs.  The need for a new church building became obvious, but the size of the congregation and its resources seemed to make it an impossible dream.  An opportunity came to sell the property on the Island Highway.

As Knox Church already owned the cemetery, additional adjacent property was purchased to build a new church.  For about a year the congregation worshipped in the Roman Catholic Church in French Creek.  The dedication of the new building took place on February 11, 1979.  Quickly, the congregation tripled in size and there was a feeling of renewal.

In June 1989 the Rev. Jack Van Holst, who had been Knox's minister for 15 years, felt that he must leave the United Church and about a third of the congregation went with him.  The remaining members rallied with enthusiasm.  Volunteers took over leading worship services, pastoral care, office and janitorial work and whatever else needed doing, until November 1989, when Knox's new minister, the Rev. Norman Thomas arrived.

In July 1993 Knox welcomed the Rev. Foster Freed and during a 12 year period (1996-2009) he worked closely with Minister of Music, Dr. Ron Klusmeier.  This was a time of rapid growth of the congregation and exciting worship and programming at Knox.

In June 2004, after many years of dreaming and planning, Knox launched out in faith and began an exciting building expansion and renovation project.  The congregation was out of the building for a 9-month period.  Staff worked out of a trailer in the parking lot and worship services were held in the showroom of the Parksville Chrysler dealership.  On March 6, 2005, Knox held its first service of worship in the beautiful new building.

To serve continued growth Knox called an additional Minister, the Rev. Hilde Seal, in May 2008.  In February 2013 the congregation made the decision to become an Affirming Ministry within the United Church of Canada.

In July 2013 Foster Freed left Knox and Hilde Seal left in May 2014.  Knox then entered into a period of Interim Ministry beginning July 1, 2014, a position filled by Jeraldine Bjornson.

In September 2015 Knox's staff team was enhanced by the addition of Jenny Vincent as Music Leader.  The culmination of the period of Interim Ministry saw the arrival of the Rev. Jennifer Ferguson in August 2016, who has brought a fresh, new vision for the future of Knox United Church.